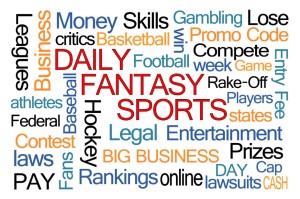 With the temperatures on the rise on the tormented world of daily fantasy sports, owners and players are experiencing difficulties telling where and when the next hammer will hit. From such accusations as “Illegal gambling” to “unfavorable playing terms,” it is apparent that mega daily fantasy sports companies including DraftKings Inc. and FanDuel Inc. will be eating humble pie in the coming days.

The Rise of Daily Fantasy Sports

The daily fantasy sports world developed out of the dying online poker. Besides the promises of quick and fast payouts and a life without the 9-to-5 struggles, signing up was the simplest part. The infamous Unlawful Internet Gambling Enforcement Act passed in 2006 not only marked the death of several online poker sites but the eminent rise of what is now facing the same axe. Unsurprisingly, Internet poker was finally closed down in 2011 while daily fantasy sports weren’t.

Over the next few years, many gaming entrepreneurs started their daily fantasy companies albeit they made little attempts to hide their relations with online poker. Back then, the companies were relatively small enough to attract the eyes of the authorities. Following the immense success and a lot of active players today, however, the authorities are seeking to tame the success of these firms.

The laws monitoring operations of the game and participations of the game are entirely different. Where DraftKings is banned means that players from that state aren’t allowed to play and not that the site isn’t permitted in that particular state. It is entirely similar to the different fantasy sports firms in various states where they are banned for players. However, the decision to prohibit a state from playing lies with the state’s authorities.

Following the massive bans, Boston-based Draft-Kings and New York’s FanDuel teamed up to fight the ruling. In each of the affected states, a joint lobbying effort that included hired a team of successful attorneys was formed. Far from this, other states including California, Maryland, Florida, and Pennsylvania were still looking at the issue.

It will remain to be seen how the entire issue will be handled in the coming days. Some states like Nevada have requested the companies to find proper operating licenses. Meanwhile, the adverts will still rock the TV screens and players will keep playing.

Let me know what you think.